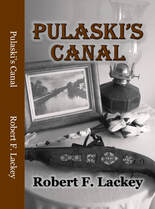 1841.  Ben Pulaski was dead. His return to Havre de Grace, Maryland, from long imprisonment in China destroys the sense of survival that has sustained Sonja as a widow and mourning mother to a lost infant daughter Ben never knew.
“Well by God, Welcome Home,” she screamed, and slapped his face.
Former shipmates join Ben to help his fledgling business on the Susquehanna and Tidewater Canal, bringing with them the volatile contradiction of that “peculiar institution”. Tricked into smuggling escaping slaves into Pennsylvania, Ben nearly dies for it. He misses crucial deadlines to the bank and once more jeopardizes his family’s security by facing foreclosure of their home, releasing a surprising explosion of rage in the little town at the head of the Chesapeake Bay. ↓↓ ↓

“…I like these characters a lot, and you really put us back in time. There's a history lesson and a damned good story here.”
-Tory Gates,  Author, Host, The Brown Posey Press Show

OPENING PAGE:
“He’s Alive!”
Aaron burst into the shanty, angry light from a bloody setting sun knifed into the darkness of the front room. He shoved a crumpled paper into his mother’s chapped hands. The widow pulled herself awake from the nightmares that tormented her, even a rare nap in her battered rocking chair. She stared into his face with empty eyes. Her fingers drifted up to push away unruly hair, spiraling strands of rose painted brass caught in the fading sunlight.
“Wha-what?”
“He’s alive, Ma! He’s alive! They were all wrong! He’s alive and he’s coming home!”
She forced her eyes to look down at the telegram in her hand, clawing back from exhausted sleep, barely finding the sense to understand the words neatly penciled on the lined telegraph office paper.
April 17th, 1841. It was sent today. It was from him.
He is alive! she thought.
Her words barely an audible rasp, “Oh my God. What will I do?”
Her face leached to white. The paper slipped away unnoticed from her trembling hand, and drifted down like an autumn leaf onto the worn plank floor in front of her. Thundering blackness stormed through her brain and she slumped from the rocker, collapsing onto the telegram from a dead man.
“Ma! Ma!”

$13.95 at Amazon.com, Barnesandnoble.com, booksamillion.com, and other internet book sales. Autographed copies will be sent at no additional cost  when ordered  from this site.
CLICK 'BUY NOW' BUTTON BELOW
RETURN TO LIST